We want to let you know about what we are up to with the main news from the last month regarding the OpenNebula project, including what you can expect in the following months.

As part of our commitment to solve bugs reported by the OpenNebula community, a new maintenance release for 4.4 Retina, 4.4.1  was released. This release only includes bug fixes and is a recommended update for everyone running any 3.x or 4.x version of OpenNebula, whom for any particular reason do not want to upgrade their cloud manager to the latest available OpenNebula version.

OpenNebula 4.6 is just around the corner, with the beta release just days away. The team is now deep into the testing and certification process, and finishing some wrinkles in the new features.

The Sunstone interface is getting a facelift, with various JS & CSS components being updated. Hard work, but it pays off with a modern and cleaner interface. Check out the pic! 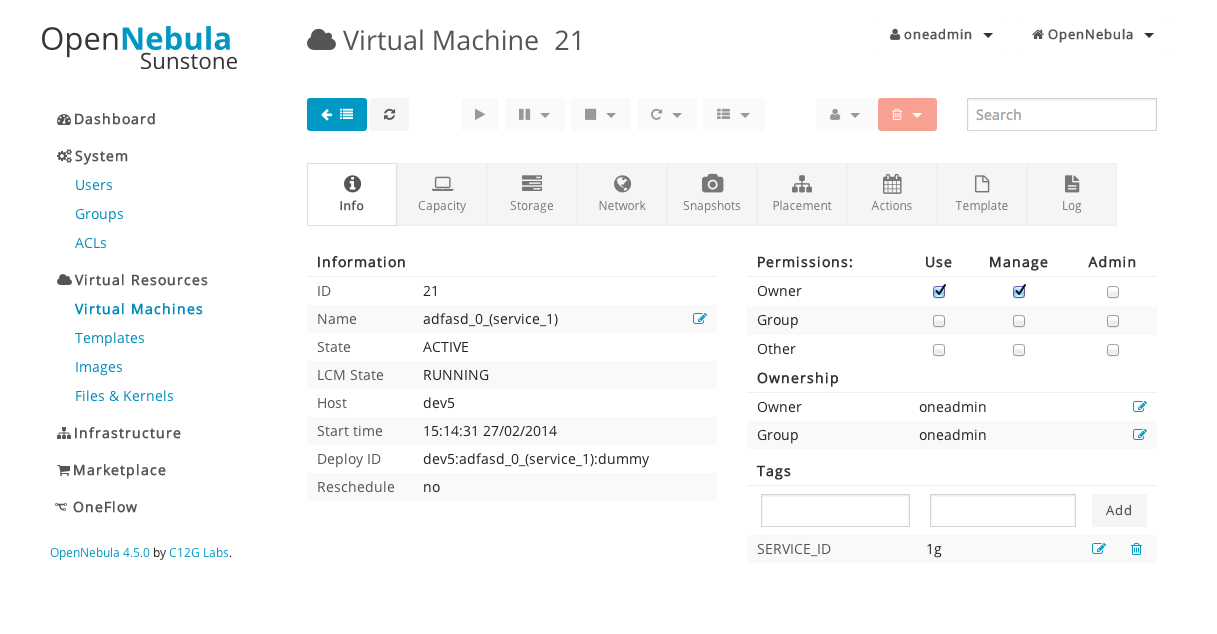 The other significant features that will be present in OpenNebula 4.6 includes the ability to achieve a federation using OpenNebulas (yes, plural is coming!) at different datacenters. The replication would be performed at the DB level, sharing the users, groups, ACLs and zone pools, while the other information would be kept locally and represent local resources. Groups would be able to have Resource Providers (basically, clusters in one local or remote zone) to conform Virtual Datacenters, thus allowing a cloud partition to enable real and isolated multi-tenancy. Check out the screencast on partitioning clouds with vDCs to get a feel on this new functionality.

Another cool feature that will be present in 4.6 is the ability to import OVAs into OpenNebula. The functionality is being implemented in AppMarket, and will be a complete translation and import of all the resources defined in the OVA: disks, capacity, network… even with the ability to change the disks format.

The AppMarket component has been updated to extend its functionality to enable the management and processing of OVA files. A new component AppMarket Worker is introduced, which handles the OVA package treatment (download, unpack, OVF parsing) and image format conversion. The release also features a new API and a new AppMarket interface via Sunstone.
Other aspects that are being revisited are storage backends, virtual networking, datastore, image and VM management and Sunstone. You can find a comprehensive list here.

Some of the above features have been sponsored by Produban  in the context of the Fund a Feature program.

The OpenNebula community is as vibrant and active as ever. We want to highlight the great user story told by the people behind runtastic, the popular fitness app. The story is about the migration from a huge german webhoster to private cloud run by them, with the ability to burst their peaks into a public cloud like Amazon EC2. It makes an interesting read.

There has been a lot of feedback on the development portal, suggesting new features and reporting bugs. We want to thank you all for this, we really appreciate it. This is what makes OpenNebula a great software, it won’t be the same without you!

First things first, this year’s OpenNebula Conference will be held in Berlin as well, 2-4 of December, 2014. If you want to repeat or find out how it is for yourself, save the date!

There are two articles posted this month comparing OpenNebula with other similar projects which we think are worth reading. First one compares OpenNebula vs OpenStack, while the second extends the comparison with VMware and Ganeti.

We are setting up a number of OpenNebula TechDays around the world. These events are designed to learn about OpenNebula with a hands-on cloud installation and operation workshop, and presentations from community members and users. If you are interested in hosting or sponsoring one, let us know!.

The first TechDay is happening in Ede, Netherlands, and it is hosted by BIT, a dutch internet service provider. The call for sponsors and for speakers is not closed yet so if you are interested drop us a line. Upcoming TechDays will be held in Boca Raton, Chicago, Palo Alto (USA), Aveiro (Portugal), Barcelona (Spain), Munich (Germany), Lyon (France) and Timisoara (Romania).

Throughout february the OpenNebula team was present at the CentOS Dojo and Fosdem, with great feedback and exciting comments including a productive talk with folks from the GlusterFS project. It was present also at CloudScape VI in Brussels and the Cloud Expo Europe in London, with a thoroughly engaged audience in the configuration tutorial, showing great interest and giving excepcional feedback.

The following events are happening this month, with the participation of an OpenNebula team member:

Remember that you can see slides and resources from past events in our Events page. We have also created a Slideshare account where you can see the slides from some of our recent presentations.